James Packwood Racing can supply and fit motorcycle exhausts from the top manufacturers.  We can supply motorbike exhausts as a mail order service as well as offering a professional motorbike exhaust fitting service.  Whether it be a slip-on silencer for your road bike or a full system for a race bike,  contact us to discuss your requirements. 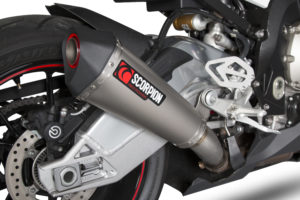 Scorpion utilises the latest technologies and extensive R&D in the development and manufacture of its exhausts. Its experience in high-level motorsport, BSB (British SuperBikes), amongst many others allows it to develop high-quality, durable and performance-enhancing products. Utilising aerospace-grade materials such as stainless steel, carbon fibre and titanium in their construction, Scorpion exhausts evoke both passion and performance, drawing from over 20 years at the top of motorsport tuning and racing successes. Scorpion exhausts embody Scorpion’s drive for continuous engineering superiority, quality and performance refinement, and above all, for the sheer enjoyment of riding.
Handmade in the UK by Scorpion’s team of top exhaust builders
Scorpion Exhausts are available in a range of styles, including: CARBINE, FACTORY, POWER CONE, RP – 1 GP, SERKET, SERKET taper, STEALTH & TAGMA.
And available in the following material finishes:

Stainless Steel
Carbon Fibre
Titanium
(Each available with optional Carbon Fibre exhaust outlets).
So no matter what your style, there’s sure to be an application to match. 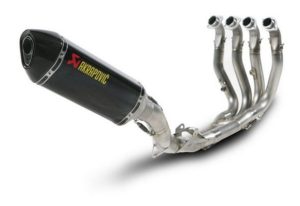 Akrapovic –  A pioneer in its field, the brand is synonymous with the highest level of design, performance enhancement and the creation of an unmistakable deeply resonant exhaust sound. The company’s products are designed and manufactured for motorcycles and performance cars by a passionate and highly-skilled workforce of over 1000 employees using the latest technology, processes and finest materials. The Racing R&D department works with dozens of racing teams. Over 100 world champions have already relied on Akrapovič exhaust systems. And this is just the beginning of a long exciting ride. Our signature hexagonally shaped muffler took the world by storm when it was introduced to the motorcycle market. A new conically shaped muffler represents the next level of evolution; it provides sharper racing sound and faster acceleration. Available in a range of styles and materials (carbon, titanium and stainless steel) as either slip-on silencers or full systems.

Research in races always has a strong effect on Arrow’s products, leading to development of a new line of systems for the most powerful SportBikes and for a new line of exhausts for maxiscooters. Arrow’s Production is not limited to aftermarket exhausts, with Research and Development of OE systems and special parts for companies such as Aprilia, Husqvarna, MV Agusta and Triumph. A 20-years-lasting experience witnesses that Arrow is a dynamic-driven company, with a young mind and fresh ideas.

James Packwood Racing is a dealer for the three top performance air filters.  Sprint Filters, K&N filters and BMC filters are all lifetime filters meaning they will never need to be replaced.  With improved air flow a performance air filter is one of the first improvements to gain some more power from your motorbike.  When matched up with an exhaust and Dynojet Power Commander your bike will be transformed with more power and better throttle response.  If your need a new air filter as part of a service then why not take the opportunity to invest in a quality performance filter? 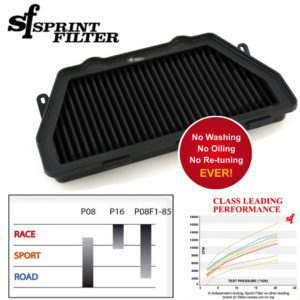 Sprint Filter has reinvented the concept of a special air filter. Unlike materials like cotton which fibre breaks easily or sponge that is inconsistent under pressure but an innovative polyester material that allows an air passage to be constant and calibrated.

The many results on the test bench show that Sprint Filters are the best solutions in order to get the right amount of air in a constant way: more AIR, more POWER, more FILTRATION. 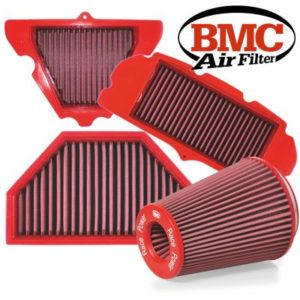 100% handmade in Italy, BMC filters are trusted by almost every high-level automotive and endurance team in racing – a testament to their quality. They are used by such teams as the Yamaha Factory team (MotoGP), Voltcom Crescent Suzuki (WSB), plus many other top teams in WSS, BSB, BSS and more!

The knowledge and experience gained on track is transferred directly to streetbike variants in order to offer the very best performance and durability, designed to satisfy the requirements of even the most demanding motorcyclist.

The materials used in production of BMC filters are of the highest standard, with:
Filters made in one single piece with no welded joints, thus avoiding breakages;
Filtering material is composed of a special cotton gauze soaked with low viscosity oil and covered with an epoxy coated alloy mesh to ensure protection from petrol fumes and oxidisation due to air humidity.
Furthermore the cotton has the advantage of being washable and therefore reusable. 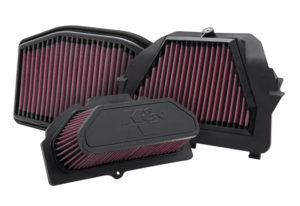 For over 40 years K&N has been designing and manufacturing performance air filters for the motorcycle and ATV enthusiast interested in maximizing horsepower and acceleration. Our air filter is designed to achieve high, virtually unrestricted air flow while maintaining filtration levels critical to ensure long engine life. K&N Air Filters will NOT void Motorcycle Warranty and are environmentally friendly.

looking for a quote?