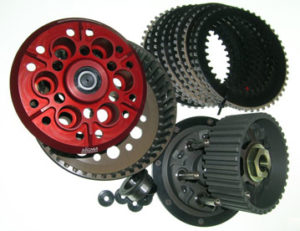 Sigma was formed in the early 1990’s by three riders racing single cylinder bikes in the British championships looking for sponsorship. Over the ensuing 20 years we have raced our own bikes, organised and run the European Supermono Cup at World Superbike and entered our own Ducati based teams in European Supermono, British Sport Production, British Supersport and the British and World Endurance championships. As our technical and race preparation skills grew we serviced, tuned and ‘built’ many Ducati’s for private owners. Early on we realised that racing Ducati’s well was much easier for the rider with some careful modifications; custom made slipper clutches were amongst the first parts made.
Sigma Performance now specialises in the slipper clutch market providing many different designs and technical options for over 50 different bikes. From simple Ducati road and track day fittings to clutches that regularly get podiums in World Supersport. Neil Spalding of Sigma also attends most MotoGP races as one of the top technical journalists in motorcycling.

Now with over 40 different clutches, our range incorporates many popular street bikes as well as the race applications that have made our name.

In racing SIGMA slipper clutches have proven themselves to be a reliable and effective addition to many a racing teams armoury. On their very first outing in a Ducati back in 1998 they won a World Superbike support race at Donington and in 2004 at Brands Hatch won their very first British Supersport race on Jay Vincent’s Padgett’s CBR 600. Since then they have won many BSB Supersport races and championships and a bunch of TT’s and North West 200 races.

looking for a quote?